Pride London takes place this weekend on the 7th and we saw the perfect opportunity to take a quick look at what authenticity, diversity and equality mean within a team and in society. 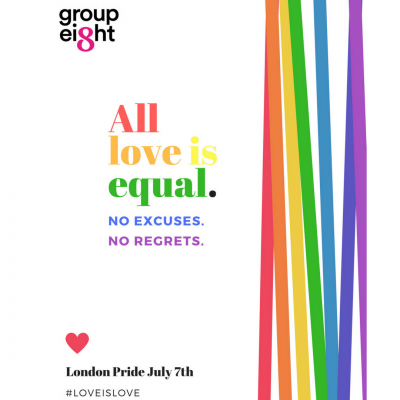 LGBTQ history month is coming to a close and for the Group8 team it’s a period that holds a lot of weight, not least because of personal connections within the team to the LGBTQ community. With the Pride London parade set to take place throughout London and various colourful performances to transpire through the day at Trafalgar square on the 7th of July, it seems as good a time as any to discuss the importance of diversity and authenticity.

The importance of the idea of authenticity, specifically people’s freedom to showcase their true identity in society is a bi-product of a general call to action stemming from diversity and equality. This notion is particularly prominent in the work place. After all - if we can’t be ourselves where we spend the vast majority of our time, where can we be? Diversity and authenticity are intrinsically linked, as both are generally repressed by societal norms and both require greater acceptance from the wider community. People still find it hard to be themselves for fear of judgement and this can be particularly true in certain work environments where we are encouraged at times to ‘reign it in’.

Nowadays, our personalities, body shape, skin colour and sexual orientation shouldn’t have to conform, individuality should be celebrated and If we can allow authenticity to really breathe, it’s our belief at Group8 that personality can achieve results. It’s impossible to embrace creativity when you feel in any way that you have to repress who you really are or what you really think.

Pride London and LGBTQ history month are both pivotal to this notion, as they allow those marginalised to emphatically showcase their difference, rather than hide it. It’s a celebration of authenticity, diversity and gender identity that unashamedly stands up to archaic ideas which no longer have a place in society.

Pride London does exactly what it says on the tin- be unapologetically proud of the person you are. We try our best to live by the phrase ‘be entirely different,' it's so much easier.